At one time in the history, classical physicists were developing the concept of energy, momentum, and their conservation (see a previous post). Most of the observed mechanical motion in laboratories  decayed fairly rapidly because of friction. Using oil and good bearings, mechanical designers could slow the loss of energy. Although unrealizable in practice, with mathematics, these early researchers could model motion without friction. In some cases, the motion could be broken down into two components: kinetic and potential energy.

A place where the concept of frictionless motion proved practical was in the case of the motion of planets and stars. Armed with Newton's laws of motion and that of gravity, scientists developed the discipline of astrophysics, which has proved itself accurate enough to guide our rockets to various places in the solar system. and even beyond. This branch of physics describes the motion of the planets very well. It fails only because of the limitations of Newton's Laws of motion, which are now replaced by Einstein's General Theory of Relativity. General Relativity is generally over-kill in describing planetary motions, except in the case of Mercury, the orbit of which is successfully described by Einstein's General Relativity, but not Newton's theory. Nevertheless, astrophysicists using classical mechanics have been able to devise orbital strategies that further accelerate probes by using fly-bys around various other celestial bodies to boost their orbits though a sling shot effect.

An interest in collisions developed early in the history of physics and continues into present day physics. Today we use high energy accelerators to maneuver  elementary particles moving a close to the speed of light into head-on collisions to test the predictions of elementary particle theories. In this post, we study two types of collisions: elastic and inelastic. Although in themselves they are more of historical and pedagogical value, the concept has a philosophical value that I think can be used to clear up various mysteries surrounding weird quantum behavior.

Consider the conditions depicted in Fig. 1, which illustrates conditions existing just before mass 1 (on the left) impacts another stationary mass 2 (on the right). Physicists find that a transformation of coordinates often simplifies and clarifies a problem. In this case consider a simple Galilean transformation to a reference frame moving with the center of mass (CM) of m1 and m2, which is pictured in the upper part of Fig. 1. That transforms the reference frame into one, in which the CM is at rest (lower part of Fig.1) and both masses are initially in motion. See the post, Grokking Galileo's Physics I,  for motivational clarification. 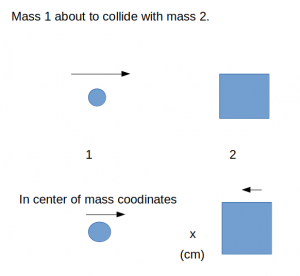 Fig. 1 Conditions prior to the collision of two masses,

In the CM coordinates (lower part of Fig.1), the CM itself is at rest and both the masses are initially approaching each other along a horizontal axis to a point where they will collide.

Below, the two types of collisions are discussed referencing the CM frame of reference (Fig. 2) for: 1. an inelastic and 2. an elastic collision. But first notice that the momenta of the two masses in CM coordinates add up to zero, the entire momentum of the system in laboratory coordinates having been invested in the total of the two masses moving with the center of mass.

In the inelastic collision (1) depicted in Fig.2, mass 1 has penetrated and stuck to mass 3. The combination of the two becomes a stationary total mass in the CM frame of reference. 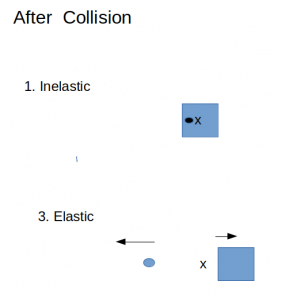 In the inelastic case, the kinetic energy of the two particles has disappeared, having been used up in mass 1's penetration of mass 2. The result is that the total mass is at rest relative to the CM. Whereas, after the elastic collision, there is motion left over in the masses moving relative to the CM.

This about the full extent of what we can discuss without the use of mathematics. In the mathematical discussion that follows, it is shown that both types of collisions conserve momentum, but in an elastic collision total energy is conserved, but not in an inelastic collision.

This part of mathematical discussion analyzes the motion before collision, where mass 1 is in motion approaching mass 2, which is at rest (Fig. 1). No external forces act on the two mass system, so that its center of mass (CM) moves at a constant velocity. By using a Galilean transformation from this frame of reference (the laboratory coordinates) to the CM frame of reference, it is shown what could have been grokked that the total kinetic energy consists in the motion of the CM of the two particles plus that of the two masses relative to the CM.

We will adopt the following notation to keep the discussion compact

The above are generic notation that are specified to the objects in question through subscripts. Further, the notation is specialized to motion along a single axis. To use a full 3D notation would be an over complication of the discussion. An example of the use of the above notation to specify the pre-collision state of the system is as follows:

Since only mass 1 is moving initially, (1.1) and (2.1) describe the state of motion of the two mass system. In what follows, bold, capitalized symbols the motion associated with the two particle system,

is the total mass.

The total kinetic energy associated with the motion of the CM is exactly equal to that of mass 1, which was the only one moving in the laboratory coordinates,

The kinetic energy associated with the movement of total mass of the system is also given by the following equation:

To carry out the Galilean transformation from the laboratory coordinates to those of the CM, we need the CM velocity, which is found by equating (1.1) and (1.2). The result is

Now apply a Galilean transformation to the two particles to a coordinate system, in which the center of mass is stationary:

It is left for the reader to show that the total momentum in the CM frame is zero,

Before the collision, however, both masses contribute to the kinetic energy in the CM frame of reference,

Substitute for the transformed velocities using (5.1) and (5.2) and after a bit of algebra, the reader should get the following equation,

By rearranging terms in (6.3), we get the simple expression.

This part of the discussion concerns what happens after the collision, which an be either elastic or inelastic.

Most of the mathematical part of the discussion is done. The rest is easy. First, we consider the easiest case, where mass 1 penetrates mass 2 and sticks to it (Fig. 2). The two combined masses in the CM system are now at rest, straddling the CM between their own centers of mass. As a result of this inelastic collision, the kinetic energy of the two masses relative to the CM just disappears. The CM relative momenta of the two masses are always equal and opposite; therefore, their momenta add up to zero, no matter the magnitude of those momenta. Meanwhile, the CM cruises along relative to the laboratory frame without change, the kinetic energy (KEi) of the two particle system (8) having been reduced to that of the CM motion alone, which we evaluate as  follows:

In an elastic collision, not only does the total momentum of the two particles remain unchanged (6), but also the total kinetic energy remains the same. How can that be? Just look at the two masses in the CM system in which the two masses come crashing together from opposite directions. The momenta of the two are equal in magnitude but opposite in direction. After the collision, each mass has undergone a total reversal in momentum. Now both are flying apart with equal and opposite momenta of the same magnitude that they had before the collision. The effect has been that each velocity has been changed to its negative. Because the kinetic energy of the two masses in the CM system (7.1) depends on the square of the velocities of the particles, a reversal in the sign of both is not going to change their kinetic energy. Therefore, the total kinetic energy of the two particles (8) remains unchanged as result of the collision.

The effects of collisions are demonstrated by using a device called Newton's Cradle. Look at this video to see such a demonstration.  Although true elastic collisions happen mostly on a quantum mechanical level, it is possible to approximate them on a macroscopic scale using highly elastic substances. In 1965, a toy called Super Ball came out on the market. It had an amazing bounce.  Each bounce on a hard surface was 92% the height of the former. Because the energy of a bouncing ball is the sum of its potential and kinetic energy and its total energy is potential at the top of its bounce, the Super Ball lost only 8% of its total energy with every bounce.

IF you want to see what goes on in a ball during a collision, see the high speed tests of a struck golf ball.

This discussion is continued in the next post, "Work and Energy--Where does the Energy Go?"

This entry was posted in energy, frame of reference, mathematics, philosophy, physics. Bookmark the permalink.